Hearthstone Arm wrestling deck, which cards to choose for the battle of the banished? 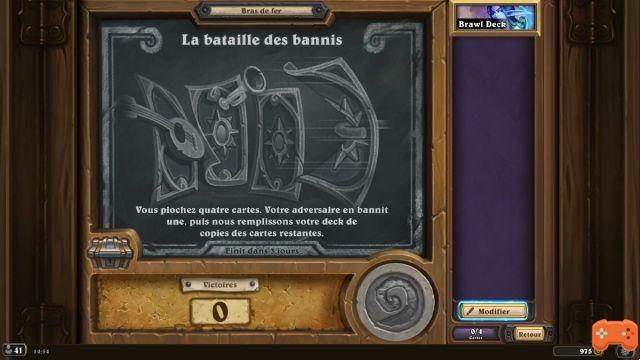 Hearthstone, Blizzard's online card game based on the Warcraft universe, continues to bring together players from around the world to play a card game on a virtual board. In addition to the classic mode, you can have fun on other game modes including some short-lived ones.

Arm wrestling is a game mode that offers you challenges and the creation of decks with a theme. This week, the showdown is called La Battle of the Banished. You must build a deck with only four cards, but be careful, your opponent may choose one that you are not allowed to play. Here are some decks you can try on this game mode

Tired Druid Deck for The Battle of the Banished

The first deck we offer is a druid deck to force your opponent to draw in order to make him lose cards and defeat him by fatigue. Very good deck if your opponent has a slow game, but difficult against aggro games. Here are the cards you need to select:

This deck only asks you 220 dust and is likely to make you laugh a lot.

This is a simple deck to understand and all you need to do is 220 dust.

The principle is to summon as many totems as possible and make them grow with the Anchored Totem, the Chisel and the legendary Golden Eye. Finally, it allows the Thing From Below card to have a low cost to quickly flood the field with creatures that won't be manageable for your opponent.

This deck asks you for more dust than the first two since it is necessary to have 1780 dust to craft these cards if you don't already have them.

There are a multitude of playable decks in this game mode. It's up to you to experiment and find fun combos.

add a comment of Hearthstone Arm wrestling deck, which cards to choose for the battle of the banished?