Kill Goodwin AC Valhalla, should it be spared in Holy Day? 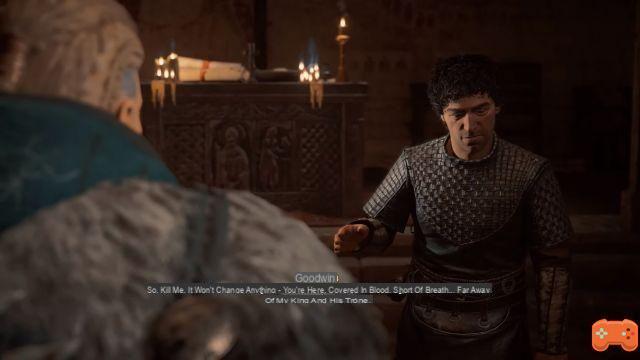 Kill Goodwin AC Valhalla, should it be spared in Holy Day? During your adventures in Hamtunscire, you will get the quest "Holy Day" during which you will have the choice to kill Goodwin or not. Find in this guide how to launch this mission and the consequences if you kill him or not.

Dance Assassin's Creed Valhalla, you will be able to complete alliance quests in order to strengthen the reputation of your colony but have strong allies for certain quests afterwards.

Among the alliances to be tied, you will have to go to the Hamtunscire to start the series of alliance quests « the king's prophecies ».

In this series of missions to accomplish, we will focus below on part 2 entitled “ holy day » and who will ask you to do a choice regarding the fate of the warrior Goodwin.

Should Goodwin be killed or not during the "Holy Day" quest in Assassin's Creed Valhalla?

After completing the first quest " The end of a kingdom you will unlock the sequel named “Holy Day”.

When you receive this mission, go to the indicated location in order to hold a strategy meeting with Guthrum for the capture of a village named Cippenhamm and in which the Roi Ælfred would hold a Christian feast. Your objective will therefore be to capture him within the Church where the celebration is taking place.

Unfortunately, when you finally enter the holy place, you will realize that you and your allies have fallen into a trap and then you will have to face the warrior Goodwin.

Once the confrontation is over, you will have the choice to kill him or not. It doesn't matter what you decide, it doesn't matter or matter since either way he dies. He will kill himself if you decided to spare him.

If you want to know more about the “Holy Day” quest, you can check out the video below from Fredericma45 or our dedicated article.

add a comment of Kill Goodwin AC Valhalla, should it be spared in Holy Day?