Rise of the Tomb Raider – Another Great Adventure with Lara Croft 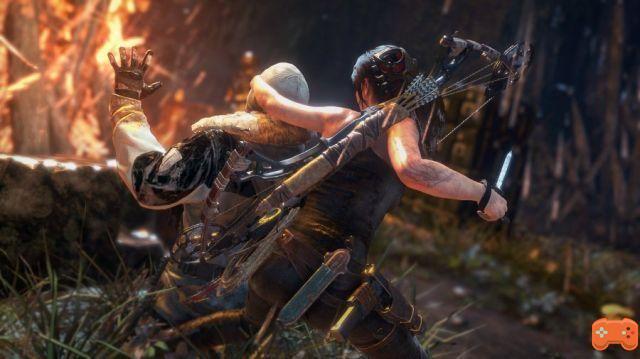 Republished on Monday, June 29, 2020: We're bringing this review back from the archives following the announcement of July's PlayStation Plus lineup. The original text follows.

The most contentious exclusivity deal since the Xbox 360 release of Final Fantasy XIII is over: Rise of the Tomb Raider has finally launched on the PlayStation 4. To bolster the release of a year-old game , Crystal Dynamics invented this edition the 20th anniversary celebration of Lara Croft. Included is the base game, bonuses that date back to the days of the original PlayStation, all title pass DLC, and an all-new level playable in VR. A bumper package perhaps, but does it top the level of quality we experienced when the series rebooted in 2013? In a year that includes Uncharted 4: A Thief's End, a franchise that is constantly compared to the adventures of Lara Croft, she faces a tough challenge. 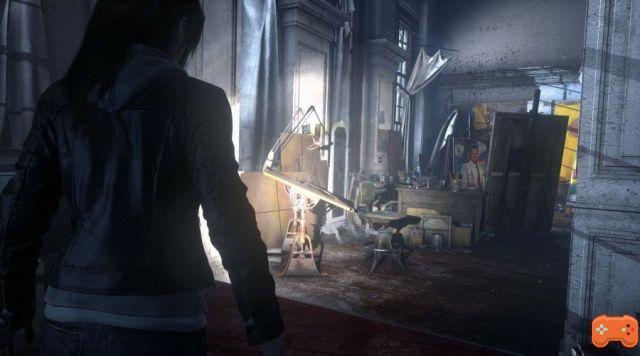 Rise of the Tomb Raider picks up a year after the events of its predecessor and tells the story of Lara's obsession with a discovery her late father made: the "Divine Source". Legend has it that the artifact grants immortality to the user and is located somewhere in the lost city of Kitezh - and naturally Lara wants to get her hands on it. But she's not alone in this, as an organization named Trinity follows her every step in an attempt to find the treasure before her. This conflict forms at the heart of the narrative as the two face off for the prize in an Indiana Jones way that rarely gives you wiggle room. Although fairly predictable aside from a few twists and turns, it all moves at a fast and enjoyable pace, which provided us with an entertaining plot that was gripping from start to finish.

If you've played Tomb Raider 2013, you'll feel right at home here gameplay-wise. You can again choose how you approach combat, what skills you equip, and what you do in expansive environments, but everything feels so much bigger and more complex than what we experienced three years ago. In terms of encounters, you can stick to stealth wide shots or all guns blazing, but now you have the option to mix the two up by silently taking out a few henchmen and then informing a group of enemies to your presence as you slip into the shadows. This puts those thugs on high alert, but you still have the upper hand as you wait in the bushes for their guard to slip. 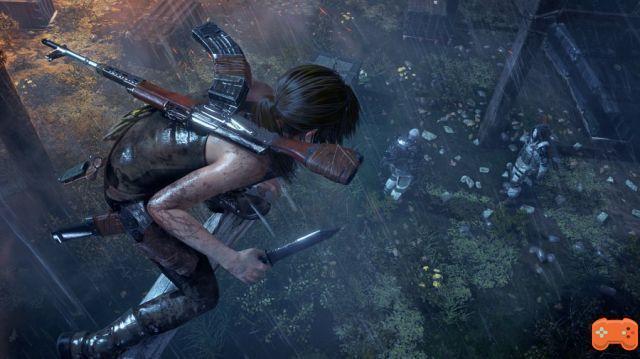 However, it's the many locales you visit that really show the evolution from reboot to suite. Sometimes you'll come across a large area that will have a main objective marker at the end, but you'd be foolish not to be sidelined by the amount of content these locations contain. They're big enough to give you some serious time to explore, but they're never so big that you'll feel overwhelmed. A variety of side missions and challenges can be found in these areas as well as some of the best content in the game: the optional Challenge Tombs. Nine of them are spread throughout the campaign and they represent the best and most challenging puzzles the game can throw at you. But in exchange for spending time confused about what to do next, you'll be rewarded with a great new skill that's always worth the investment.

While traversing the ground is important, climbing is just as vital for navigation, and unfortunately, this is one place where Lara's expedition may fall a little short of Nathan Drake's last excursion. While Drake will scale buildings fluidly and jump from ledge to ledge, it takes Lara a bit longer to traverse the stage around her, as if there's a bit more weight in her jumps. That's not necessarily a bad thing, but players expecting a seamless traversal system may feel a bit disappointed. In a way, this is combated by the sheer amount of tools Lara has to conquer the icy cliffs and rocky mountains she faces. The ax makes a return as an ice axe, making climbing Siberia's frigid walls a much easier ordeal, and the famous bow and arrow makes a reappearance as both a weapon of murder and a tool of navigation. All of the gear is unique and equally important, with late-game additions including a spool of thread that lets Lara hang onto hooks mid-flight. 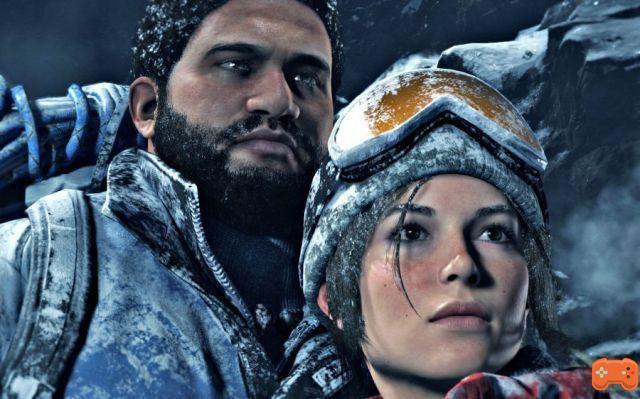 As you explore the vast backdrops, you'll come across base camps that will return after the 2013 reboot. Here you can equip new skills, craft ammo and new items, upgrade your weapons, and fast travel. The most vital of these four is your skills which are divided into three tiers: Brawler, Hunter, and Survivor. The categories focus on improving different aspects of Lara, from gun and melee buffs to shortening the time it takes to craft items while you're out in the field. It's a deep enough system that sometimes allows perks to complement each other when stacking up to give you an even bigger boost. The structure allows you to see Lara grow as a character not only in the story, but also as a fighter, craftswoman, and navigator.

Throughout your travels, you'll discover a huge amount of collectibles, six different types, in fact. There are Safes, Relics, Documents, Murals, Survival Caches, and Coin Caches. Relics and Documents are the two most important, as they tell ancient stories and flesh out the world in the present. Locating these collectibles is made easier by the return of Survival Instinct - Tomb Raider's version of Batman's Detective Mode. This will highlight important objects in Lara's immediate vicinity and makes collecting treasure much easier, but it's easy to become too reliant on the mechanic, as we found ourselves immediately spamming survival instincts when we have discovered a new area. In turn, this potentially removes any sense of actual discovery. 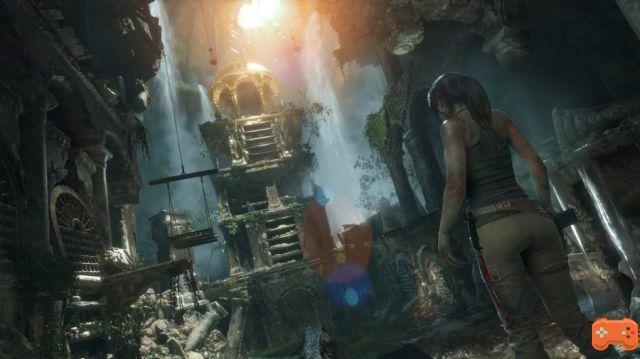 While the game's exploration mechanics are top-notch, it's the shoot where Ms. Croft doesn't quite hit the mark. Firing a weapon still feels a little off, like there's a big input lag. This makes aiming much more difficult than necessary, and we found ourselves missing shots that we were sure we had lined up correctly. The Pistol, Assault Rifle, and Shotgun base weapons all suffer from this, and no weapon upgrades manage to fix the glitch. It's an issue that was also present in the Xbox One version, so it's disappointing to see that it hasn't been fixed despite an extra year of development time.

As mentioned earlier, the 20 Year Celebration Edition comes with a slew of additional content, with the most significant piece coming from the game's Season Pass: Baba Yaga: The Season Of The Witch. This piece of DLC can be accessed through the main game around three to four hours and takes you to a new location to battle a new enemy, the witch Baba Yaga. This area takes on a whole different aesthetic, with a psychedelic and gruesome vibe. The DLC stays true to the core game components of the main game, but culminates in a fantastic final boss battle which is one of the highlights of the set. You'll get two extra hours from this expansion, three if you're looking for collectibles and looking to complete the challenge. 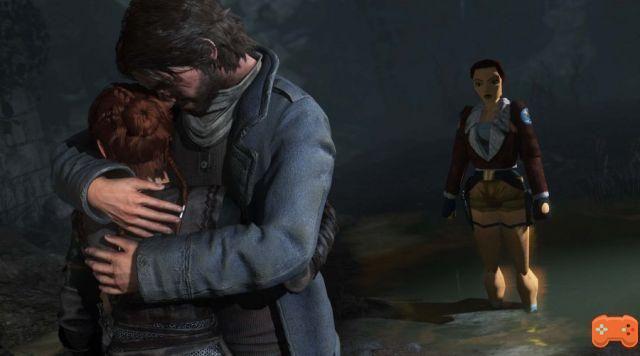 Next on the agenda is the brand new level titled Blood Ties, which is also playable in VR. We'll have a separate article for you in the next few days which will focus on the PlayStation VR variant, while this review will look at the standard version. Blood Ties takes us back to Croft Manor, and after the death of Lara's father, ownership of the mansion is in a bit of a gray area. The bailiffs want Mrs. Croft out, but she is determined to keep the house for herself, so she takes it upon herself to find her father's will or uncover some sort of evidence that could secure the property. This sets off a treasure hunt through the mansion as you solve puzzles his father has set up and crack safe codes in order to get closer to finding the will. Just like in the base game, the residence is full of documents and relics. However, these flesh out Lara's past and the relationships she had with her parents, something longtime fans will greatly appreciate. It's a neat little addition that expands the character of Lara and the Croft family, as well as bringing together a whole host of fanservice and a few surprises here and there.

Another addition is Lara's Nightmare, which again takes place in the Croft Mansion, only this time Lara has to deal with a horde of zombies and their leader. It's a pretty fun mode that lets you slay the undead and destroy floating enemies known as Skulls of Rage, but it won't bring you back for a second hit. We got a little bored after about 20 minutes as it feels like an afterthought.

With such a wealth of content, it's a good job that the whole assortment looks phenomenal. Incredible views of the Siberian mountains loom in the distance as you pass through lush gardens and snow-covered paths in the foreground. Waterfalls tumble over the cliffs and rivers weave their way through the landscape in an effort to impress your eyeballs even more. The ruins of the city of Kitzeh almost look like life, as if the Romans had made it their home ground of long ago. Cutscenes are another place where Crystal Dynamics has excelled, with faces and expressions that can certainly rival the Uncharted series. With just one instance of a major texture pop-in, it's safe to say that Lara's latest foray looks outstanding and plays out well.

Rise of the Tomb Raider is the complete package for newcomers and veterans of the series. Except for a few goofy cannon shots, the base game looks great, with its sublime exploration mechanics, wonderful semi-open hubs that provide tons of side content, and sensational graphics. Lara's Nightmare seems like a bit of a throwaway, but Blood Ties and the Baba Yaga DLC are more than worth your time if you want to deviate from the main adventure. Lara Croft is back where she belongs, and you owe it to yourself to join in the 20th anniversary celebration and return to a raid of looting.

Audio Video Rise of the Tomb Raider – Another Great Adventure with Lara Croft
Romance AC Valhalla, how to have a relationship with Ciara in Wrath of the Druids? ❯

Feature: On the 25th anniversary of PlayStation, we share the fondest memories of our PSone

Guide: Upcoming PS4 Games and Accessories for December 2019 and January 2020

What is the release date of Death's Door on PlayStation 4/5?