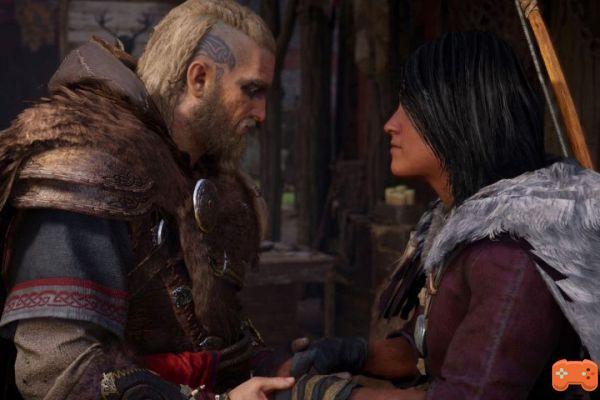 Assassin's Creed Valhalla is broad and rich in content. The interactions between the characters and the dialogues play an important role and as with many other role-playing games, it will be possible to have romance with characters within AC Valhalla. Find below a list of characters where a romantic relationship is possible and how to start the relationship.

For the moment, only 11 characters have been found at the level of possible romances. Whether you play asEivor male or female, that will not affect available romances.

To be able to start a romance with Petra, the huntress, you will need build a hunting cabin within your colony.

After doing all her quests, you will be able to get a date with her. Then talk to her again after the date so that she ends up confessing her feelings and you can then reject her or start a relationship with her.

gunlodr, the daughter of the King of Jotunheim is one of the possible relationships in AC Valhalla.

In East Anglia you will meet two brothers, Brothier and Embroider. At the wedding of King Oswald, Embroidering will make advances to you and you can respond positively or not to his advances.

To romance No who sits next toa waterfall in the mountains of Rygjafylke, you'll have to find his comb to start this romance. Once he is found, she will suggest that you take a walk with him and whenshe will offer to comb your hair, accept to start your relationship.

Be careful though, do not attempt this romance before Randvi has left Sigurd or risk having repercussions later.

Within your colony, another character can be romanced and this is Tarben, the Baker. To be able to unlock his romance, you will need added the Bakery and in some cases also the fishing hut for Ravensthorpe.

Do both quests that he will entrust to you to have a dialogue where he will talk to you about the feelings he has for you. You will have the choice between respond to his advances with the line of dialogue with a heart or ignore it. Once the relationship has started, this one will put an end to the other acquired romances.

À Hemthorpe   snotinghamscire, you can face stigr. During the confrontation in verbal jousting, you will need regular advances. Once the duel is over, you will have the choice between accepting his advances or not.

When you attempt to form an alliance with Glowecestre, you will meet tewdwr who is the future ealdorman. During the festivities for his coronation, he will flirt with you, so you can opt for a romantic party ou a platonic party. Regardless of your choice, it has no impact on the story and the relationship is just a one-night stand.

Strid is the wife of Bristan, the king of Essex. As you progress through the story quests in the area, you come to the moment when Bristan asks you to kidnap his wife. After doing this fake kidnapping, Estrid will invite you to talk privately in a temporary camp. You will have the possibility to sleep with her. Unfortunately if being with Estrid interests you, it will only be a one-night stand.

Here in the case of Stowe, we cannot speak of a real romance since you will only have one dialogue where you can flirt with him when you meet him in Lunden. You will also learn more about the character and his feelings as the alliance quest progresses for this region.

At the end of the saga of snotinghamscire, during the quest " Sous la peau ", which will start after the death of a jarl, you will have to cross a mine with Vili. After have reached the other side of the mine, you will be able to talk to him and you will begin to reminisce about the past and you will then have the choice to say yes or no to his advances. As with many other romances in this guide, this will be just a one-night stand.