What Happened to Anime Fighters Simulator 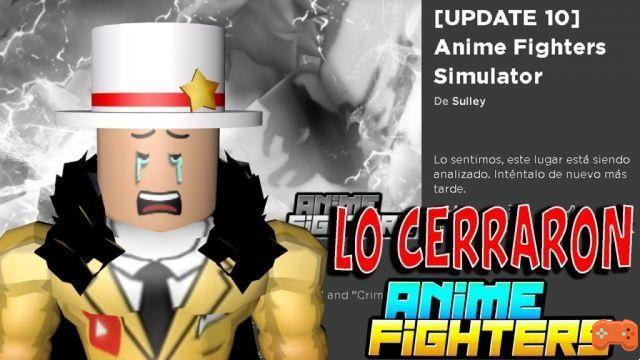 Anime Fighters Simulator one of the games of Roblox most popular among the entire platform. It has a plurality of worlds, levels, rewards and the strongest and most powerful fighters in the cosmos. This game allows you to train the characters to reach their highest potential and level of damage to fight with the opponents. You can also get unknown fighters.

All enthusiastic users of this game have been anxious, anxious and overwhelmed by the following facts:

One of the reasons that has sounded the most online and social networks regarding this closure of this game has apparently been "an infringement of copyright", since these games are based on anime franchises and, Even when they are not called the same, the characters are adapted to images of different well-known animes such as: Alicia, Piccolo, Naruto, Dragon Ball, among many more. These comments are based on the last update of the game where it was possible to remove the face of the characters and the following 3 days they close. Even when different sources handle this information, the authors of the game have not provided the official reason for the closure

The community of anime fighters is not satisfied by the lack of information regarding what happened to the game; They feel annoyed for everything lost and invested in this platform, and even more so for not knowing when they will be able to access it again.

What are the causes of the closure of Anime Fighters simulator

Daire Author of Anime Fighters Simulator made his first post on social networks in response to unsubstantiated comments that have been spread on different communication platforms; expressing to each and every one of the followers that Anime Fighters would be closed for an unknown period of time, due to:

What Happened to MeepCity ❯

add a comment of What Happened to Anime Fighters Simulator