Yule wrestling AC Valhalla, how to win the competition? 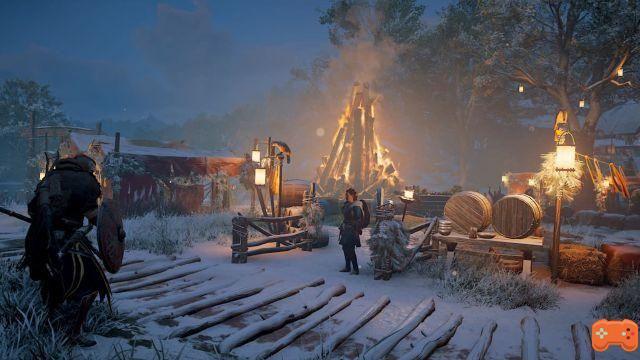 Yule wrestling AC Valhalla, how to win the competition? During the Yule Festival which lasts until January 7 in your colony, you can participate in a wrestling tournament. Find out how to win in this guide.

Assassin's Creed Valhalla launched since December 17 the first season for the game named the saison de Yule. For 3 months, many additions will be made during the Yule season but a first event is already taking place ingame until January 7, the Yule Festival. During this event, you will be able to participate in a wrestling tournament. Find out how to win in this guide.

How to Win Yule Wrestling Tournament in AC Valhalla?

To participate in the wrestling tournament, talk to Sunniva and you can start the battles.

During this competition, you can recover your life points at the end of each round, since Eivoir will drink a shot. However, the further you go in the tournament, the blurrier your character will see.

As for clashes, the first two will be formalities. The third will be more complicated unless you've done the Yule quest " Cattle tracking because then you will face Bertham who will be a pretty pitiful and knockdown opponent with a single strike.

The fourth duelist will be like the first two fighters. Just parry the blows and strike when you can.

Your fifth opponent will be quite tough and you will need place three parries to lower his stun gauge. As with other encounters, dodge and strike whenever you get the chance.

From the sixth fight, you will lose the ability to lock your opponent. Your opponent is very skillful. It will easily dodge the majority of your light and heavy attacks, so you'll have to wait until you can parry a strike and then perform a combo.

The seventh fight features a Goliath. It performs many unstoppable attacks. This clash will be a battle of attrition, so we recommend trying to keep your distance and watch the movements of the fighter. As soon as he has made a heavy attack, take the opportunity to land a few hits.

The eighth and ninth fighter will be like the Goliath but with less health.

Finally, the last wrestler will be as tall and strong as the Goliath, but he will also be very agile. Dodge as much as you can all his attacks and if with any luck you manage to pass a parry, quickly use a three-hit combo then dodge again as he will attack you quite quickly. Use this tactic to defeat them.

Once all opponents are on the mat, you will receive 80 Yule tokens. Of course, this tournament is infinitely repeatable.

Audio Video Yule wrestling AC Valhalla, how to win the competition?
Predator house, where to find it in Fortnite? ❯

add a comment of Yule wrestling AC Valhalla, how to win the competition?