What is the best Genshin Impact Battle Pass One weapon? 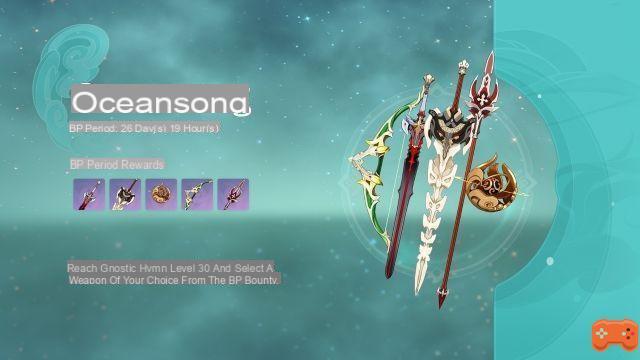 If you are currently ranking your Gnostic Battle Pass in Genshin Impact, you might be wondering which weapon to choose when you reach Rank 30. You will have five different options to choose from, Sword, Claymore, Catalyst, Polearm and a bow. If you are wondering which one to choose and which one is the best, you have to consider which characters you have.

If you have a Venti, the bow is a clear winner. The aimed shot will have a 50% chance to cause a cyclone, dragging enemies into it and dealing 8 stacks of damage at 40% of your ATK. This would be superb for setting up his abilities and maximizing your damage.

The Serpentine Spine Claymore is also an attractive option, buffing your damage output while in the field, but also increasing the damage you take. This will really shine if you're good at dodging, as dodging incoming damage means you won't lose any stacks.

Finally, the Dark Sword is another good option, increasing your damage and also giving you healing in a slump. For our money, the best overall weapon is the bow, as it will work just fine on either Venti or Fischl, the two main bow users people probably have in their party.

The important thing is to consider the group you lead and the weapons you have. Consider your builds carefully and choose the best weapon for you.

Audio Video What is the best Genshin Impact Battle Pass One weapon?
Which SSDs will be compatible with PS5? ❯

add a comment of What is the best Genshin Impact Battle Pass One weapon?