New legendary gems on Diablo Immortal, what are their effects? 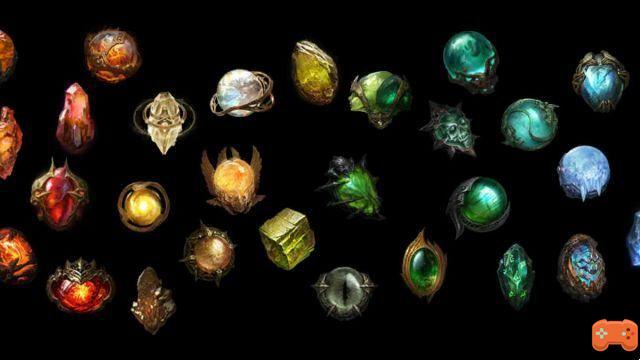 Diablo Immortal has gone through many updates since its release in June 2022. During the month of December, the game offers its biggest free content addition ever with the arrival of Terror's Tide, the Surge of Terror.

Le Surge of Terror is the new Diablo Immortal update. It brings a lot of new content, including new legendary gems. The latter are 5 in number, with gems in all rarity levels.

New legendary gems in Diablo Immortal, overview of their effects.

Terror's Tide so brings a lot of changes, like a new area, but also new gems.

These will allow players to try out new builds! here are the 5 new gems. Note that all damage values ​​change depending on the rank of the gems.

Heartstone (Heartstone), 1-Star Gem: The duration of your absorbing shields is increased. While shields are active, they also reduce the duration of out of control effects.

Kir Sling (Kir's Sling), 2-Star Gem: When attacked, you have a chance to emit a beam of light that blinds all nearby opponents, reducing the field of vision and inflicting a loss of control for 4 seconds. Can only occur once every 20 seconds. You also deal bonus damage to blinded targets.

Volatily Shard (Volatile Fragment), 2-Star Gem: When you defeat a target, you trigger a volatile explosion that deals damage. You also deal bonus damage for 2 seconds. Only occurs once every 8 seconds.

Concentrated Will (Strength of Will), 5 Star Gem: When you use a dash skill - a dash, an instant move skill - a Guardian Angel appears in your wake and launches an explosion in your direction that deals damage. When the angel reaches the heavens, he grants you a blessing that increases damage dealt and movement speed for 2 seconds. Can only occur once every 6 seconds.

Hellfire Fragment (Hellstone Fragment) 5-Star Gem: Using a skill summons 3 braziers of hellfire that pursue opponents within 6 yards and explode on impact, dealing damage. Each hellfire brazier deals 50% more damage than the previous one. Can only occur once every 20 seconds.

These gems have powers very interesting. Crusader could very well take advantage of the Did Fronde, as the gem's effect indicates that blinded targets take more damage and the Crusader has some blinding skills. It might work well in PvP as well.

The Barbarian could really use strength of will with a lot of loads in his kit.

Last but not least, Hellstone Fragment looks like a very high quality go-anywhere gem. Its balance will decide whether or not it becomes a must have for all Diablo Immortal builds!

Diablo 4 pre-order, where to buy the game in advance? ❯

add a comment of New legendary gems on Diablo Immortal, what are their effects?