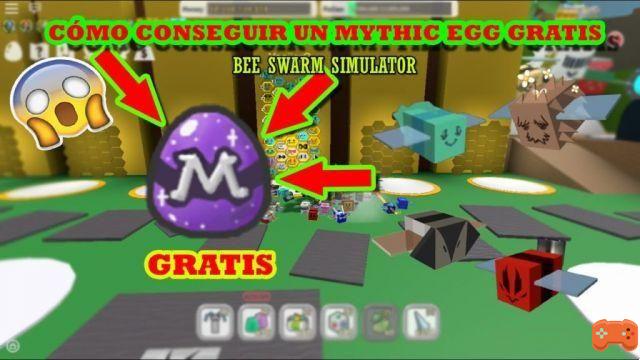 Now, the eggs in Bee Swarm Simulator They are fundamental, even more so in the case of a mythical egg, so we will explain the simplest way to achieve it. Likewise, you will know which are the most essential missions of the game of Roblox and where to get great rewards.

How to get a mythical egg in Bee Swarm Simulator?

who wouldn't like to know How to get a mythical egg in bee swarm simulator? For this reason we prepared an interesting article. First of all, Mythic Eggs are one of the strangest items in the game. bee swarm simulator inventory. Since, this egg will always and in all circumstances transform into a mythical bee, that is, the player will not get any other kind of bee.

In addition, it is one of the simplest and safest ways to get a mythical bee, which is why they are so appreciated in the game, you can buy it in robux shop without doing missions. Although, you should know that even in the store it is quite difficult to achieve, since it has a very high cost and you can only get three.

How to get a mythical egg in Bee Swarm Simulator?-step by step.

To get a mythical egg in bee swarm simulator previously there were many methods, but with each update they were suppressing certain of the ways to get them, more peacefully we will guide you so that you know how to get mythical eggs easily:

How to Achieve a Kenjutsu in Shindo Life ❯