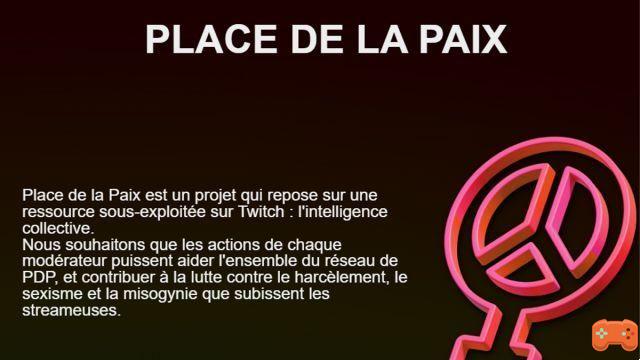 In recent months, several testimonials from streamers have highlighted several ailments affecting Twitch. Many are streamers like The last ou maghla who experience daily harassment, misogynistic, hateful or racist messages.

As Billy explains very well in his thread on Twitter, Place de la paix is ​​a bot that detects sexist, misogynistic or racist behavior. It is then up to the moderators to interact with this bot to highlight users who do so.

The moderator of a Twitch chat will have to use the following command: @PDP_Bot @[speudo of person to watch]. Once this action has been taken, this person will no longer be able to express themselves on the chats of all the members of the Place de la paix network for the next 24 h. During these 24 hours, the other moderators can validate the suspension definitively, or cancel it. A person permanently banned from the Place de la paix network will no longer be able to comment on any channel using the bot.

Finally, to fight against multiple accounts, a validated telephone number will be required to express oneself in the chats of the Place de la Paix network.

As presented live, the tool to fight against sexism, mysoginia and racism in Twitch chats is online: https://t.co/iY8Tv3FaJh??❤️ thread to unroll just below

The bot will only work for the following reasons:

It will thus not be possible to abuse it to ban a person for reasons other than those mentioned above.

To join the network, you can go to the official site Place de la paix:

The whole procedure is explained very clearly. You must perform the following actions:

A Discord server will be set up to gradually refine the tool and jointly develop its future and its use.

add a comment of Place de la paix: Billy's anti-racism, misogyny and sexism botot on Twitch, how to join the network?